Recently someone updated a Rails Model ID datatype from int to uuid. This has caused issues with ElasticSearch in my local instance:

After some digging I around I was able to resolve this by deleting the Indexes. Rails/SearchKick rebuilt them afterwords.

You can view the available entries with a GET to elasticsearch with “*” as the path.

It’s easier to read if you pipe it into jq.

From the list, identify the object that is failing, mine was organizations_development. Delete the mapping with

From there, elasticsearch will rebuild it and index your data.

This morning I was attempting to customize DoorKeeper. After an hour of prodding I wanted to wipe all my changes.

Except that’s not what I ran. I ran clean with the flags ‘fdx’ which also removes hidden files. So I lost all my .env and config files. Sure I could spend the next hour or two hunting those down.

This months PWL meeting discussed ‘Feral Concurrency Control: An Empirical Investigation of Modern Application Integrity’. The intended audience is database system researchers. It explains how popular application frameworks lean on ORM’s that disregard the database concurrency control solutions. Instead of using the databases system for foreign keys, constraints, and transactions they create a set of rules that perform in the application layer. The paper demonstrates how validations in the application layer give us inconsistent results.

Unique constraints are given as an example. When a field with a unique validation is created or modified in Rails, it will query the database to ensure that value does not already exist.

Applications with minimal traffic can be run with only one Ruby on Rails instance.

As requests against the applicaion increase, we can add more Ruby on Rails instances to handle the traffic. 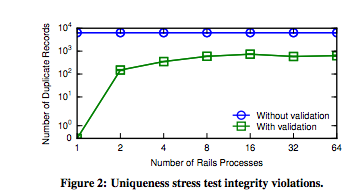 As a Ruby developer with a history of Rails I was surprised at the accusations coming from the paper and discussion. Rails doesn’t prohibit us from using database concurrency control solutions. In my experience we have always used them.

This was really eye opening. I’m glad I went to this discussion and I’m thankful for the Seattle Chapter of Papers We Love. Many people come to Rails from boot camps or are self-taught. While ORM’s don’t prevent you from using the database it definitely encourages it to be blindly used as a storage system. It’s changed my thinking in how to help grow jr developers and the importance that needs to be placed on what’s happening in db/schema.rb.

Here is a list of resources I will be referencing in future conversations:
* Transactions
* Constraints vs Validations
* Postgres Explain

As a side note, validations where only inconsistent when compared to other records (am I unique, does this key exist). Validations performed consistently when evaluating data in the current record (is this a string and does it have a pattern?).